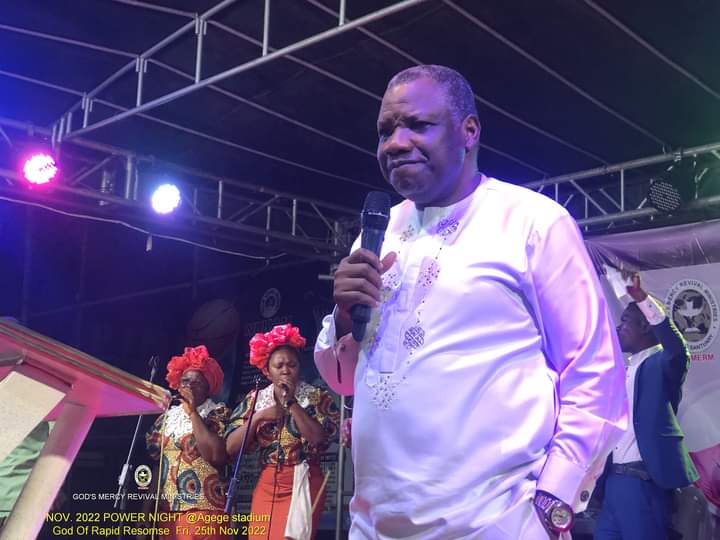 God’s Mercy Revival Ministries (GOMERM) held the November 2022 edition of its popular Power Night outreach at the Agege Stadium, Lagos, with a huge participants from within and outside Lagos trooped to the Lagos sports arena for the all-night of great miracles, signs and wonders.

With the theme, “God of Rapid Response,” both the young and the old in their thousands from Lagos,Abeokuta, Ibadan, Ile Ife, among other cities across Nigeria filled the stadium to capacity to partake of the historic night where profound testimonies of wonders including healing and deliverance were recorded in the lives of many of the participants.

It was a definitive encounter with God of Mercy’s wonders as life-transforming and destiny-changing prayers were lifted high to heaven by the people during the service at which GOMERM’s General Overseer and Set-man, Dr. James Akanbi and other anointed men of God ministered. 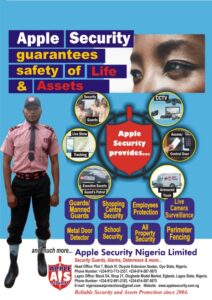 The all-night programme opened with back-to-back energetic and soul-lifting praise songs as popular gospel artiste, Laolu Gbenjo, and his amazing team of praise worshippers, led the congregation in high-praise to God. The attention-grabbing dance choreography of his praise team, the melodious tunes from the band, and the rich lyrical content of praise songs from different Nigerian languages, ensured that everyone in the congregation enthusiastically sang and danced along as the people worshipped and danced without inhibition before their maker.

The sonorous rendition of GOMERM’s choir, the Zion Voices, titled “Favour Now, Blessings Now, Miracles Now”, was also another highlight of the night. It was a faith-boosting song that was wonderfully-delivered to the applause of the congregation. Indeed, there was no dull moment at all throughout the night as the people were highly spiritually charged to receive from God.

By the time Dr. Akanbi mounted the altar for his over two hours ministration around 2:30am, the people of God were already highly expectant. Of course, they were not disappointed judging by the mighty move of the Holy Spirit in the congregation as those in various forms of demonic bondage and oppression received their total freedom and deliverance as the Holy Spirit revealed their cases to his servant.

While speaking on ‘God of Rapid Response’, the theme of the night, Dr. Akanbi said there is a special dimension of God that makes him appear very quickly for his people when they call upon him. Citing Biblical references like Dan. 9:20-22, Exo. 6:3, Isaiah 65:24, 2 Sam. 15:22-30, 2 Sam. 17, 2 Kings 7:1, and 1 Kings 18:30 among others, the General Overseer said the God of Rapid Response is the God that sends answers speedily even while his people are still praying. He declared that on the platforms of the Blood of Jesus, Amazing Grace and the Mercy of God, no one who attended the service will go away without receiving testimony from his God who commissioned him to ministry.

Dr. Akanbi later prayed for the sick, those looking for the fruits of the womb and people with satanic bewitchment among others. He prophesied their healing, deliverance and instant miracles in the name of Jesus.

While the testimonies of people who received divine visitation during the prophetic ministrations of GOMERM’s General Overseer, Dr. James Akanbi at previous editions of the power night programme were shared at the service, by the time the service ended, many instant testimonies and miracles were also recorded as God of rapid response showed forth his power, especially in the lives of many of those who were coming in contact with the ministry for the first-time ever.

To the glory of God, the power night did not end without some people also making the decision to give their lives to Christ and accept him as their saviour and Lord.

Here are some of the pictures from the GOD OF RAPID RESPONSE Power Night held on the grounds of Agege Stadium, Lagos. 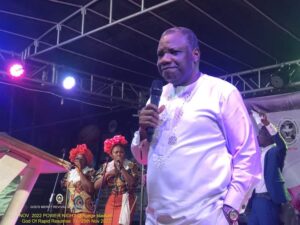 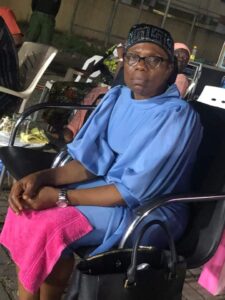 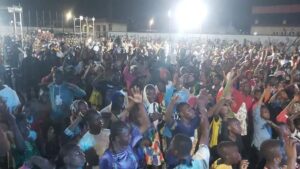 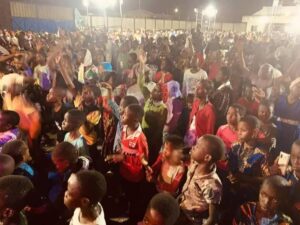 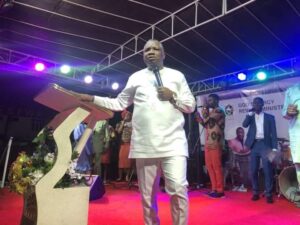 Compass 2022 aimed at navigating ministers through the right route- Omokorede